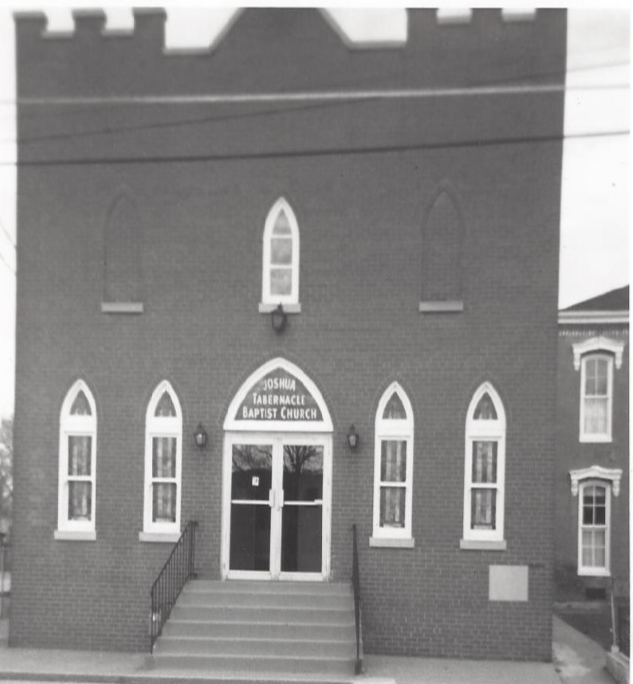 In May, 1915 Reverend J. M. Moore, the Pastor of Mt. Lebanon Baptist Church, then located on Ninth Street, between Magazine Street and West Broadway along with 37 members requested their letters due to a misunderstanding. Reverend Moore and the members accepted an invitation by a local mortician, Harvey Burns, to hold services in a room over his business located at 426 South 9th Street. Later that year, a council was formed and the church was organized.  The council consisted of the following ministers:  the Reverends R.P. Whitesides, W.H. Bowen, J.D. Spurlings, G.F. Watson and (No first name on record) Rolland. Following the organization, George Taylor recommended the name of “Joshua Tabernacle Missionary Baptist Church,” which was unanimously accepted.  The newly formed church called Rev. J.M. Moore as Pastor. The following were ordained as Deacons: John Payton, E.A. Sellers, Rufus Parker, George Taylor and William Willis. Under Rev. Moore’s pastorate, the church progressed immensely. The Church Aid and The Willing Worker organizations were formed.  After three years of service, Rev. J. M. Moore accepted the call to Pastor a church in New Albany, Indiana.

The Rev. J.M. Whalen served as interim Pastor until the Rev. W.B. Roberts was called as the next Pastor. He was shortly succeeded by Rev. W.M. Moore.  During Rev. W.M. Moore’s pastorate, the church relocated from Ninth Street to the northwest corner of Tenth & Liberty Streets.

In 1921, the A.M.E. Zion church vacated a building located at 426 South 15th Street, lot 27.  The members agreed to purchase the building on November 28, 1921. The church remains at this location. After Rev. Moore resigned, the Rev. J.C. Dailey was called as Pastor. He served for six years and then was succeeded by Rev. Robert Thomas.

In 1937, Rev. G.D. Miller was called from the pastorate of Twenty-Eighth Street Baptist Church here in Louisville. The church membership and ministries grew during his thirteen years of service and leadership. Remodeling of the edifice was underway. Church ministries such as the Brotherhood, Usher Board, Mixed Chorus, Sunday school and the Missionary Society were organized. Rev. G.D. Miller served as Pastor for thirteen years.

Rev. G.D. Miller’s health began to decline in August of 1951. Rev. Arvell Carroll who was serving as an Associate Minister was called as Pastor.
In 1958, James L. Snardon, a member of Joshua was called into the ministry and preached his initial sermon on August 27, 1958. He was licensed and ordained by Rev. Arvell Carroll on March 2, 1962.

Under Rev. Carroll’s spiritual guidance the church continued to grow. The sanctuary was enlarged with the addition of a balcony and an educational annex. With God’s divine help, the church paid off the mortgage. In 1963 Rev. Carroll retired as Pastor after 11 years due to an illness. During his illness and retirement, Reverends Joe Northington and James Snardon supplied the pulpit. Rev. Arvel Carroll departed this life on March 6, 1978.  On July 31, 1964, Rev. James. L. Snardon born in Allensville, KY was called to serve as pastor of Joshua Tabernacle Missionary Baptist Church and served as pastor for the next 45 years. (1964 – 2009).

In 1973 the Church installed a Central Air Conditioning system. Recognizing the need for church transportation, in 1974 the first church van was purchased. Sister Mary F. Snardon was the church’s first van driver.

There were several programs designed to discipleship to the youth. The Nursery provided a safe and enjoyable atmosphere for infants and toddlers during Sunday worship service. This ministry remains in place today. The Junior Choir was organized for youth ages 6-16 under the direction of Brother Albert Johnson, Sister Elois Dudley and Mary E. Woods. The Youth Usher Board was headed by Brother William Henry Johnson. Another youth program in place was the “The Royal Ambassador Boys Basketball Team”. In 1982 they won League and Tournament Championships.  The Coaches were: Robert Pugh and Albert Starkes. George Edelen was the Team Manager. In 1980, the Junior Deacons were organized. BTU (Baptist Training Union) meetings. were held on Sunday afternoons to provide Fellowship and Discipleship for the youth. A Young Adult ministry, “The Harvesters” designed for adult women ages 18-25 was organized by Sister Mary F. Snardon.  The MIA’s (Missionary in Action) a group of young men and women organized to compliment the Senior Missionary   Society

The Churches’ Community mission outreach was one of the first in the Russell Area to provide Thanksgiving dinners to needy families. The Central State Ministry was organized and continues to serve as the oldest Missionary ministry of the church. Individual singing groups were combined to form the Mass Choir.

Dedication services for the new building were planned for the week of November 7 – 13, 1983, which      included a ceremonial march from the old building into the new building. A historic “Laying of Cornerstone” was held on November 4, 1983, with services conducted by St. Thomas Lodge. The first baptism in the new church took place on January 2, 1984.

In 1993 Energized Baptist Church was birthed from Joshua Tabernacle Baptist Church, and Rev. Milton Seymore was called as the Pastor.

On April 22, 1990 the church library room was established. The Joshua  Church Library was named

“The Nwachukwu Library” in honor of Reverend Dr. Peter Nwachukwu, a Nigerian native, and part of our International Mission Outreach. Dr. Nwachukwu served as the Director of Christian Education until his return to Nigeria.

“Children’s Church” was organized in 1995 with services on Sundays during the 11AM Worship hour. A Children’s Bible Study hour began on Wednesday evenings to correspond with the Wednesday Adult Bible Study.

In 1992, additional pews were installed in the choir stand and the nursery was refurbished and named the “Nancy King Nursery”. The parking lots were enclosed with cables.

During this period, a new sound system was installed in the church. To accompany the new sound system, the Tape/Media Ministry emerged to record services and sermons providing copies to homebound church members.  The “Trusted Partners” Ministry composed of  men of the church was formed and organized by Rev. James L. Snardon and began meeting on Saturday mornings. In 1997, David L. Snardon and Damon Saunders acknowledged their call to the ministry, preached their trial sermons and were licensed.

In 1997 as an addition to the Children’s Music Ministry the “Bell Choir” under the Supervision of Sister Ella Shoulders was formed.

Under the umbrella of Joshua’s Missionary Group, the Prison Ministry was formed in 2001. This ministry included worship services and activities at Kentucky Correctional Institution for Women as well as the Kentucky State Reformatory.  The Angel Tree Ministry was formed as an additional outreach ministry of the Prison Ministry to assist prison inmates and caregivers by providing Christmas gifts to their children.

The Trusted Partners, renamed “The Brotherhood” holds Saturday community Bible Study at local westend restaurants along with weekly visits to the church sick and shut in members.

On December 7, 2003 the church celebrated another mortgage burning ceremony.

Deacon Michael Lee, accepted his call to the preaching ministry and preached his trial sermon and was licensed on April 23, 2006.

On February 15th 2009, Aleatha J. Baltimore Coleman and Tammy I. Mason were the first ordained female Deacons of the church.

The church grounds were re-landscaped and Saturday morning Alcoholics  Anonymous  meetings were formed at the church. Additional ministries were either  developed or   reorganized to ready the church and congregation for it’s’ role in the 21st Century. Some of these are: The Women’s Ministry, established under the umbrella of the Senior Missionary Ministry. Women’s monthly Bible Study, “Women of the Bible” was organized. The Parking Lot Ministry was established. The Pastor’s Aide Ministry was formed.  The Praise Team was organized with the Music Ministry. Joshua entered into partnership with CLOUT (Citizens of Louisville Organized and United Together). In 2013 Pastor David L Snardon was named Co-President.  The Social Media Ministry began and Joshua launched its web site.

Minister Michael Lee under the leadership of Rev. David L. Snardon saw the need for an additional outreach Ministry  which began as Communion Service on second Sunday  afternoon at Regis Woods Nursing Home. In 2014 worship services expanded and began at Christian Health Care East several times during the year.

On September 26, 2013 Cassandra Snardon-Harrison acknowledged her call to the ministry. She preached her initial sermon on January 26, 2014 and was licensed to preach by Pastor David L. Snardon. She is the first female minister in the history of Joshua.

The “Centennial Legacy Wall” that appears in our church foyer, was commissioned by local artist, Kaviya Ravi. It was unveiled and dedicated on August 23, 2015 at the 11 AM service.

On December 20, 2015, Michael Lee was Ordained to the work of the Gospel Ministry.

In April, the Church partnered with New Roots/Fresh Stop, a non profit organization providing fresh fruits and vegetable at low to no cost to the community. A market was set up every other Saturday during the summer and fall.  The upgrading of the sound system began in the summer of 2016. In August, the East Russell Community Enrichment Corporation was reinstated.

To God Be The Glory

There are no posts to display. Try using the search.